It’s that time of year again! Watchouse 2016! Four days and three nights in our own little oasis. Last week I casually mentioned it in my post about finishing the boat. What fortuitous timing! We didn’t have to use the raft again! Now, making a bit of a spectacle of ourselves on the quay is a bit of a tradition what with furiously hammering together a ramshackle driftwood raft as the tide races in. This year we had little Snipe. And thank god! On one of the biggest tides this year there was no way we could have controlled it in the currents, even once we could touch the bottom again! We loaded the boat as the tide came in, getting ready to leave at the top of the tide, when the water would not be racing. By this time, however, we were waist deep on the quay and clambouring onto the boat with a large crowd watching. Par for the course really. And we were off!

As ever the weekend was about friends, food, and fun. Mornings usually saw a big breakfast followed by sailing expeditions on Snipe. One morning we headed down to the point and anchored. The boys jumped out and swam around the boat. We girls waited to see if they could get back in. Only barely! The seals were basking as we were!

The lovely Fiona and Jackson from Oystercatcher Catering provided meal after meal of joy! Afternoons saw lunches, kubb, fishing, and yoga in the sun. We really lucked out and the weather was sunny and warm. Later in the afternoon beer and cocktails came out leading up to some fantastic dinners. I don’t know how Jackson manages to produce the quality of food we eat in that ‘kitchen’ (and I use the term loosely). Pallella, rich and creamy fish stew, and mega-BBQ followed by cheese and red wine. There is something about being out in the sun and wind all day that makes you sleep amazingly!

Now, things couldn’t go too perfectly, and on the way back our engine conked out while we were preparing to enter the cut. We threw down our anchor and came up with many possible senarios for getting all of us back to land with our belongings. But lo and behold, up comes our friend Chris who helped us get Snipe back in the water. And who then gave us a tow back…? Bless them! We arrived in style on the quay under tow and created another mild spectacle just as we would have had the raft been there. Its just fate!

Another spectacular year on Blakeney Point. Already looking forward to next year!

When I first met Marek he had a boat in the garage. That was 11years ago (this Oct!). It was a wooden boat his grandfather had built in the family garage in the 1960’s and was passed through the family down to Marek. It had not been in the water since the 1990’s and needed some serious love. We toyed with renovations every few years but had only managed to sand her down, to what we thought was the base level until August 2015. With a bit of an unexpected windfall we brought her up to Blakeney from her shed in West Sussex for some intensive work.

I will fast forward through the highs and lows of learning about power sanding and epoxy and skip to this past week or so. With a newly bought engine she was ready for the water!!

Of course two days after her relaunch were some mighty big tides and 40mph winds. What a baptism of fire, for her and us! 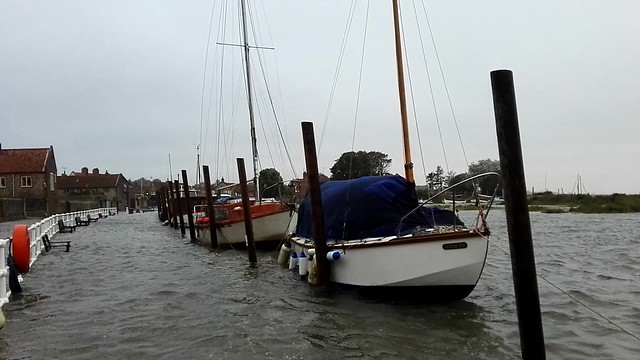 Her triumphant return and maiden voyage (matron voyage?) was our annual trip to the Watchouse on Blakeney Point. With the highest tide of the year (or thereabouts) it was quite a spectacle on the quay loading 4 people and two dogs (for a day trip). And don’t forget ll that lovely food from Oystercatcher Catering!

I suppose all there is left is for me to learn how to sail!!

It’s that time of year again! Last year’s visit was all summer and sunshine. This year was more autumnal. “Seasons of mist…” And all. That having been said, some things were the same. Food by the wonderful couple at Oystercatcher Catering with good friends and good  wine.

The raft made another appearance. Grey, windy, and wetsuited up; we pushed and pulled quite a load. The dinner and fire were a welcome site.

The next several days were grey and misty with breaks of sun. Much fun was had with games, fishing, and BBQ breakfasts!

Our last day brightened and it was like summer again for a day. It all started off with freshly caught fish, followed by some rough surf swimming.

Finally it was time to go home. Coasting in on the rising tide was a dream compared to the ride over.

The last leg was aided by our own personal life boat to give us a pull once the tide turned and the trip was complete.

This year proved that the Watchouse is great fun in all weather. Here’s to another great year!