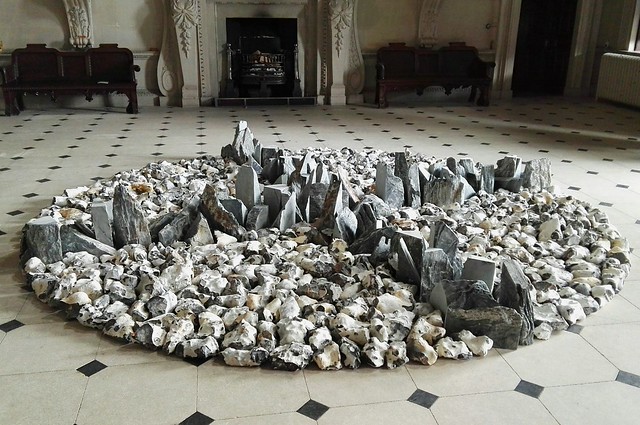 Richard Long’s circle of flint and slate hushes the grandeur of the Stone Hall at Houghton. The Roman emperors, whose fine classical busts line the walls, must be gazing down in confused envy at the monochrome tumble of jagged slabs and rocks which have upstaged them.

Long’s arrangement, a cross within a circle, aligns not to the axis of the room, but rather to magnetic north – a reminder, perhaps, that his works relate first to nature and then to the spaces in which they’re housed.

Standing in the 40 foot cube of Houghton’s Stone Hall, amid an embarrassment of sculpted riches by Giueseppi Artari and John Michael Rysbrack, the realisation slowly dawns it has all been faded into background scenery by Long’s striking installation.

Thanks to an invite from Davina Barber at Norfolk by Design, I had a chance to admire it for a moment in the quiet of the hall a few days ahead of the opening of EARTH SKY, the exhibition of Long’s works which runs at Houghton from 30th April 2017.

Long has been labouring at Houghton for a year and a half, adding to his permanent work, Full Moon Circle, which was installed on the lawn in 2003.

Elsewhere, the green space between the driveway and the stable yard is now home to a circle of mighty tree stumps from the estate. Placed upside down, with their roots waving towards the sky like antlers, they will be good company for the deer herds which roam the park. Apparently Long was inspired by his recently acquired knowledge of Seahenge, the 4000 year old wooden circle discovered in 1998 on the coastal sands at nearby Holme-next-the-Sea. 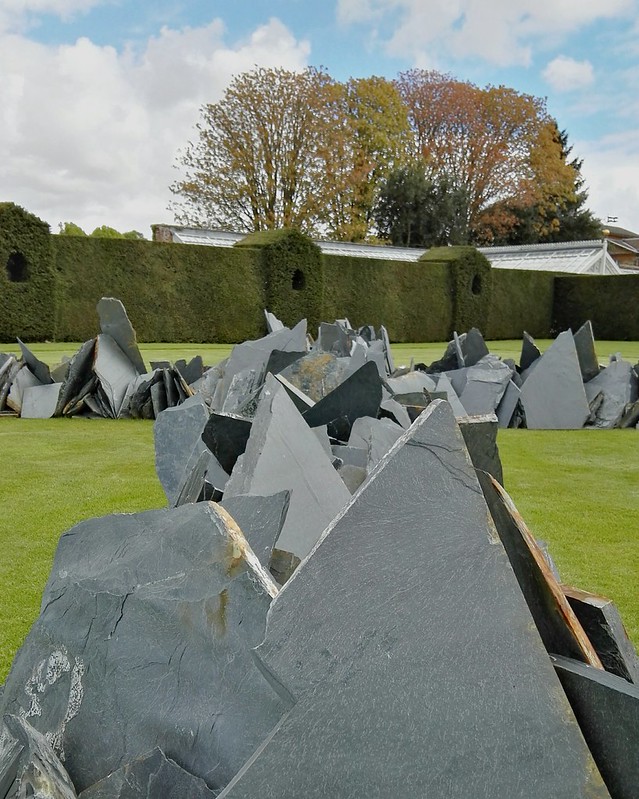 The Walled Garden, lined with apple blossom and tulips in late spring, features another cross by Long, this time executed entirely in slate and on a much larger scale than in the Stone Hall. It rises in peaks from the impossibly green lawn. Seen from ground level, it appears as a mountain range in miniature, jutting up into the huge blue and white Norfolk sky. 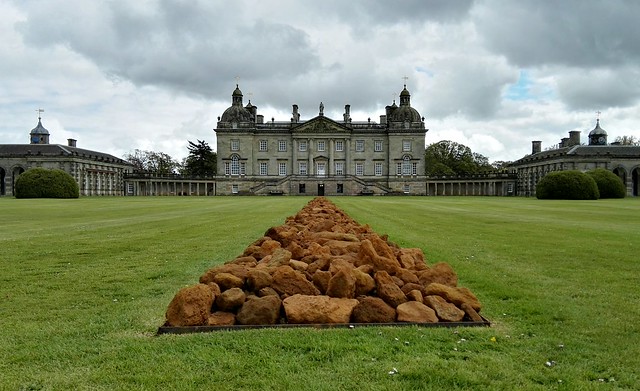 I suspect it is Long’s ruler-straight stripe of local orange carr stone, which slashes through the lawn for more than 80 metres between the house and the Full Moon Circle, which will remain the exhibition’s enduring image. It gives scale to the massive expanse of Houghton’s lawn, leading the eye on and on until it is eventually absorbed in a bucolic haze of fields and grazing herds. This is the runway visitors will now follow to the Full Moon Circle and I’m told you should hope for rain, as the circle’s slates – dry on the day of my visit – shine in the wet. 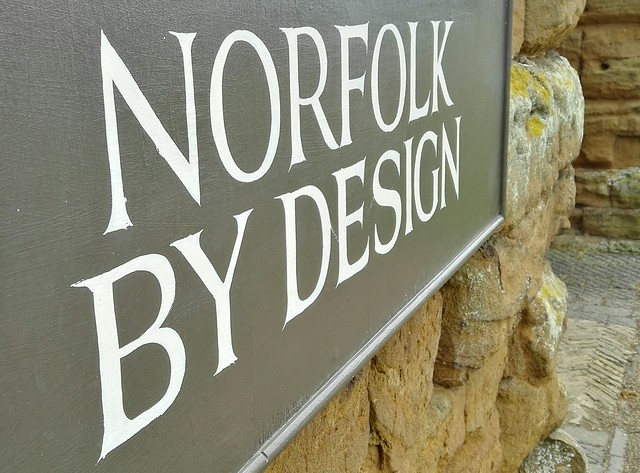 The stable yard, faced with more of the carr stone, hosts an exhibition of works for sale curated by Norfolk by Design. If Long’s sculptures felt like a chance meeting abroad with a kindred spirit, Norfolk by Design’s collection was much closer to home. 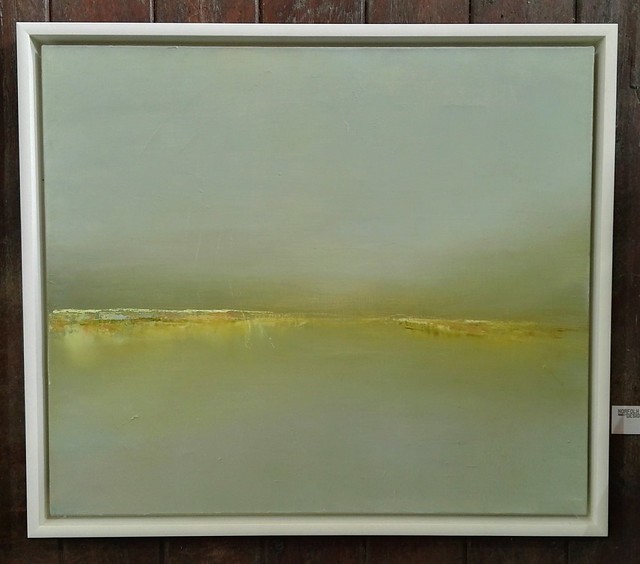 I was drawn immediately to Lorraine Bewick’s landscapes. The wild expanses of Blakeney Harbour at low tide, where I walk daily, are beautifully evoked in her ‘Blakeney Sands’. This is work by someone who understands the middle of the harbour – when the water is out – is as much a journey for the imagination as a trip on foot. 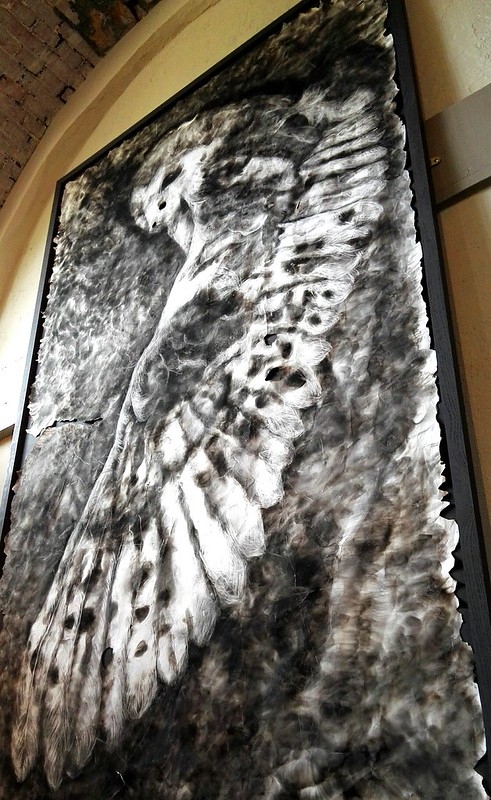 Maria Pavledis’ giant ghost of an owl, created as a smoke drawing, hovered over another of the horse stalls which house the exhibition. The use of smoke seems very fitting for a creature which, at this time of year, Michelle and I often see drifting above the marsh on evening walks between Morston and Blakeney. 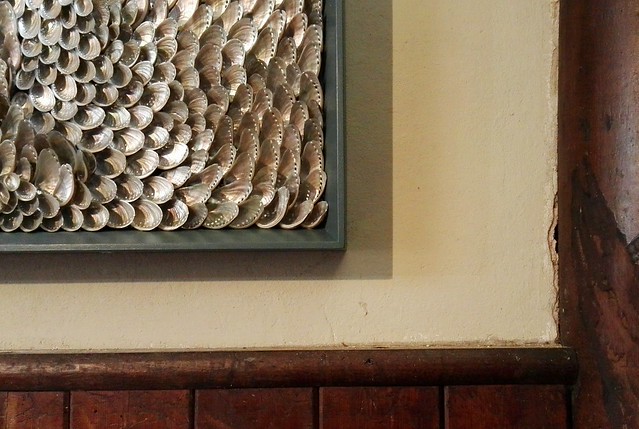 I remembered Blott Kerr-Wilson’s wonderful shellscapes from a previous Norfolk by Design exhibition. Their sweeping textures and metallic sheen remain just as striking, especially at the large scale on display at Houghton. There’s something about framing the curving patterns in a rectangular space which seems to amplify the natural form of the shell. Our nearest mussel beds at Morston, sadly, are no longer producing, but the shells are everywhere on the coast. At Freshes Creek, a little anchorage near Stiffkey, the path itself is made of crushed mussel shells laid down over the years by the locals. 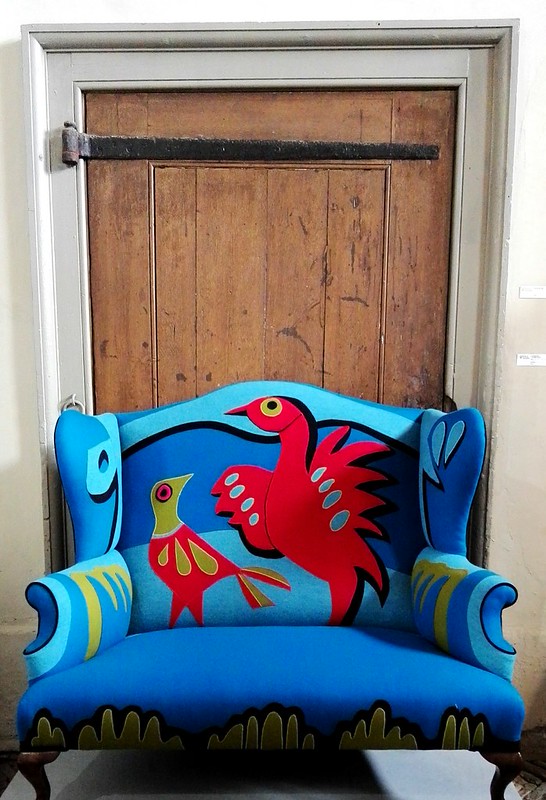 There were bright flashes of colour to catch the eye throughout. A large armchair and footstool by Helena Lynch stands out in bold blues and reds against the wood and cream of the stables. 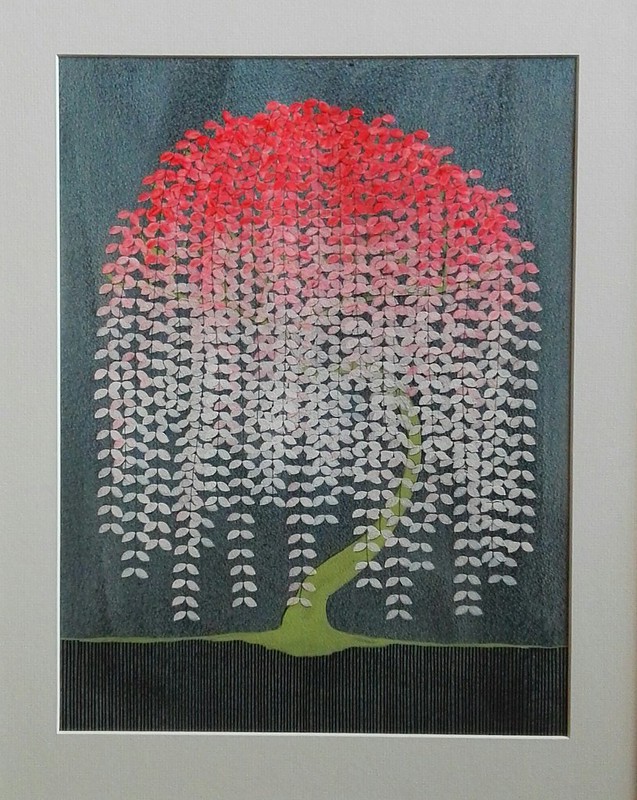 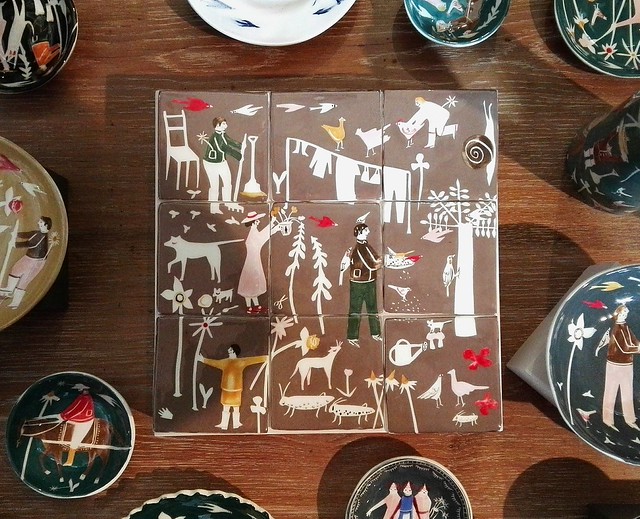 The progression of spring to summer in Norfolk is an evolving haze of sun and cloud, fields and flowers, expanding days and living outside on the allotment and the water. A set of nine tiles by ceramicist Polly Fern captures the essence of that, or at least how it often feels to us in our little coastal corner of the county.

Norfolk by Design have done a tremendous job of showcasing the diversity and quality of art and craft in the local area, a reflection perhaps of the many worlds which co-exist in this place of farms and beaches, country lanes and fishing villages…and, of course, great houses with great taste for art.

EARTH SKY, 30th April to 27th October, and Norfolk by Design, 30th April to 30th September 2017, at Houghton Hall. Thanks to Davina Barber for the invitation.