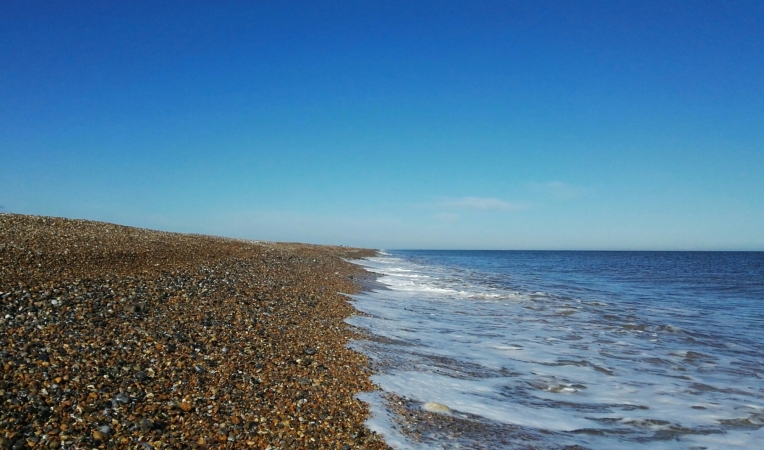 The first swim of the year will always be cold. That’s half the point, surely? After a winter and chilly spring bundled in layers and coats, there’s something cathartic about the burning freshness of the North Sea, still carrying it’s memories of January’s churning, grey waves.

We cheated a little. Instead of tackling the open sea from Blakeney Point, we walked down the harbour at low tide to a favourite swimming hole. Even when the water is out, there’s enough depth left to swim a few laps.

A weekend of warm sunshine had taken the edge off that first plunge, but there’s still a degree of steeling oneself for a ritual which soon becomes second nature as the season progresses. Clothes off, don’t wait too long in the chill of the wind, tell the dogs to sit, dive under and then call them in: leaping with all their Labrador enthusiasm to save their floundering humans from their folly.

It’s never as cold as you expect and you never regret the decision to go for it.

There’s nothing like the feeling of the sea on your skin and I notice it especially on days when work has called me to the big city. There’s no better way to reconnect with life on the coast than returning home from a day of meetings, cycling to the beach and diving into the waves.

Emboldened by that first foray, I woke early the next day to find the sun already shining and a big tide rushing in past the quay. What better way to work up an appetite for breakfast than another swim? I walked down to the sheltered spot where the channel turns on its way to Morston and dived off the ramshackle old wooden platform.

Without the benefit of a full day’s sunshine to warm it, the morning tide felt much, much colder than before. Puffing against the incoming flow, I managed a few quick strokes of front crawl back up the channel, then let the tide wash me back down to where I’d started, escaping up the ladder to a towel and hearty breakfast.

It’ll get warmer every day. By September, there will be evenings when the water seems to melt into a liquid sunset around you and night swims glow with phosphoresence.